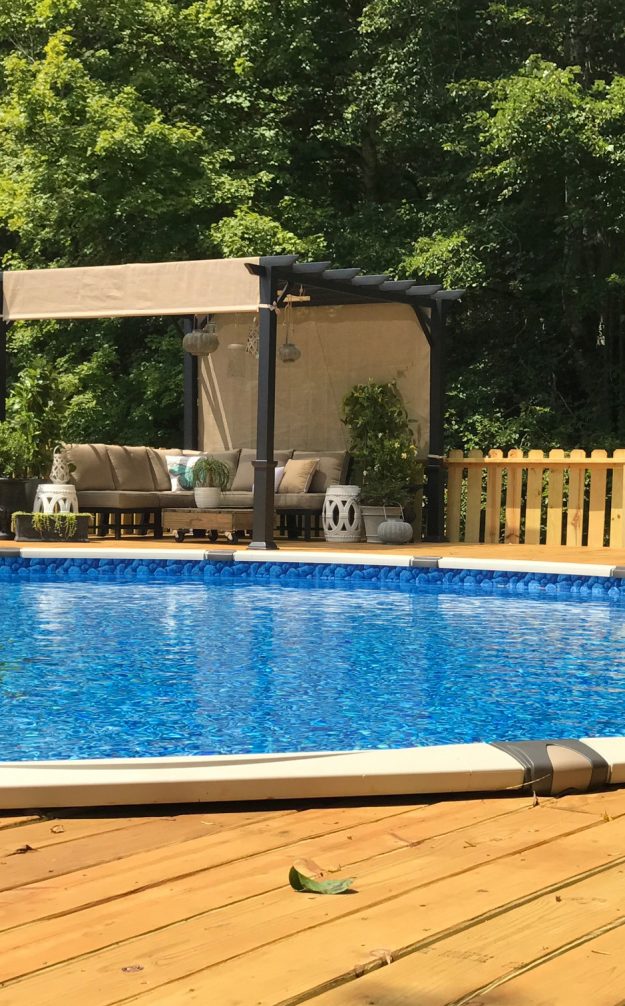 Why we chose an above ground pool:

Living in the country, we are blessed to have several large, old, beautiful trees in our yard. One of which sprouted up the year we bought this home when I was a child (because we live where I grew up), and my parents let it grow. That tree has literally been here as long as I have. Sadly, there was no way to install an in-ground pool without risk of damaging the roots to that tree.

Additionally, the cost of a new in-ground pool was almost triple that of an above ground pool. With proper care an above ground pool can last 25+ years, and if we still use it regularly at that time, we would most likely invest in a few one. But we probably won’t have to buy another one at our age. We will most likely have to replace the liner in 10-12 years, but that’s only $1500 or so, which is minimal when it comes to the repair costs of an in-ground pool.

Do your research & buy your above ground pool from a reputable company.

My biggest regret was that we purchased our pool from the biggest distributor in the country, Family Leisure. They were terrible to deal with. Admittedly, I didn’t do my research before, I just assumed that being the biggest in the country meant they were reputable. I was so very wrong.

When we purchased our pool it came with free installation, which was great because we did not want to install it ourselves. If you’ve been here before, you know we are hard core DIYers. We’ve only ever had two other contractors on our property – one to install a new HVAC unit, and another to pour concrete for our garage floor. We’ve literally gutted this house from end to end, inside and out. But the thought of installing our own pool wasn’t intriguing. So we intended to pay for installation if needed.

The problems came from the first day, when the original people who set up our pool didn’t properly finish the sand on the bottom. Which left wrinkles. Which meant that a few weeks later the entire pool (that had been completely filled) had to be drained, fixed and refilled.

The next problem was that the pump was missing an O-ring. It came that way from the manufacturer, but wasn’t checked when installed so as soon as the water was high enough to start draining into the filter, water went right out of it like a geyser. After that was fixed, there was a leak in the sand filter. It took four different service calls, two months, and three different pool guys to figure out to replace a part that was cross threaded.

Problems went on and on and on…. in total we had over 20 visits from different pool installers/techs/etc. to fix the problems. And then we had more issues with the chemicals. But that’s further down the post.

In other words – ask questions, read reviews, get referrals from your friends. But most likely the best bet is to find a local mom & pop pool company that’s been in business a long time. They wouldn’t still be there if they didn’t know what they were doing. If I had it to do over again, that would be the one thing I would change.

Side note: I have NEVER, in nearly 10 years of blogging here, written badly about any company. Ever. But this company was so difficult I felt like it was worth it to share our experience with those who are considering buying a pool. 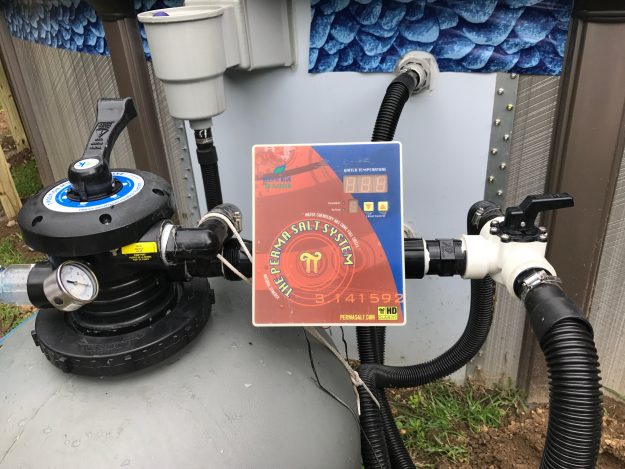 For almost 4 years, we had a metal frame above ground pool from Target. We used chlorine in it and found it easy to maintain. When we went to buy this pool, Family Leisure sold us on the PermaSalt system. We asked about a salt water pool, and they sold us that instead.

Their claim was that it was much easier to maintain, just pour a bag and bottle of chemicals in the pool once every two weeks and it would keep your water crystal clear. I tried and tried for weeks to keep everything just right – because you still have to monitor the PH & alkalinity of the water. But after repeatedly calling and getting the run around about not having clear water, it never worked for me. I honestly felt like they blamed me for not taking care of our pool.

The PermaSalt system isn’t really a salt system, its a copper ion system that runs with their “enzymes” (which they have no idea what they actually are.) And when I finally demanded they remove the system that hadn’t worked in all the weeks it had been installed, it turned out that there was a short in the system and it was never working properly. But in all those calls (probably a dozen or so), Family Leisure never once thought to actually check the system itself.

The day it was removed, we started chlorine chemicals and the next day we had a crystal clear pool. And it’s been clear ever since.

With all that said, if I had a chance to do a TRUE salt system, I probably would. But it would mean a huge investment, and I’m not sure if I want to make that investment when I actually know how to maintain a chlorine pool. (And at levels that aren’t harsh, overwhelming, or bleaches out everything.) 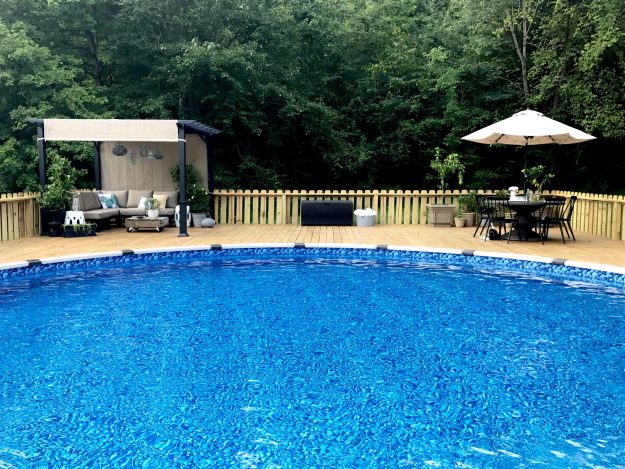 Over the last few years in our small pool, we’d had a lot of close family and friends join in to enjoy it. So we decided to go bigger – much bigger – from an 18 ft. round to a 30 ft. round so there was plenty of space for everyone to all jump in the pool at once and have room for more. It’s amazing!

Honestly our pool is wider than our house. Crazy, huh? But we’ve had 15 people in there at once and it feels so spacious. There’s also plenty of room to swim for exercise, too.

We chose a 52 inch tall pool so we would have 46 inches deep of water. The only size larger was a 54 inch tall with 48 inches of water – however it was $700 more and I just couldn’t see giving that much more for 2 inches of water.

There are much larger pools, and much smaller. But I do know that a round pool has more swimming area than an oval pool does. So there’s that to consider.

Tips on Decking Around the Pool:

THIS IS ONLY FOR REFERENCE – NOT INSTRUCTIONS. 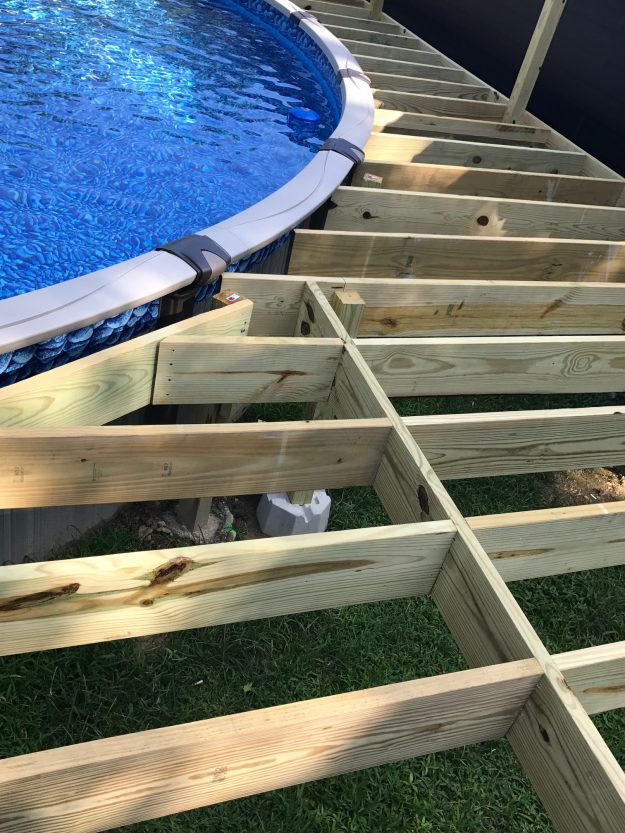 Figuring out how to deck all the way around the pool was tricky. We couldn’t’ find info anywhere on how to do it, so we kind of had to figure it out on our own. 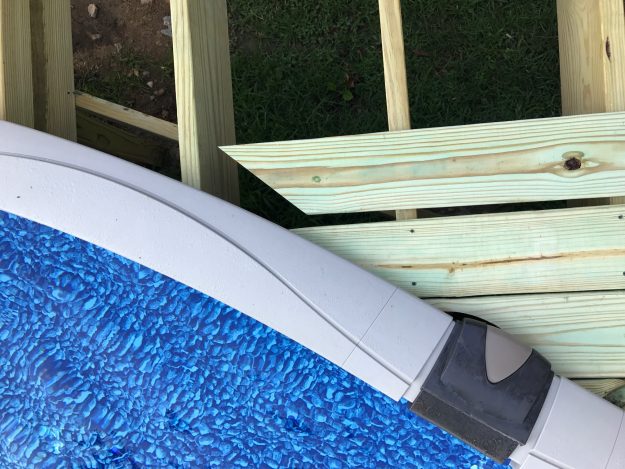 We did learn how to get boards up under the lip of the pool, by framing it in (as shown above) and then using a jigsaw to cut out exactly what we needed to get the decking boards under the top plate of the pool. 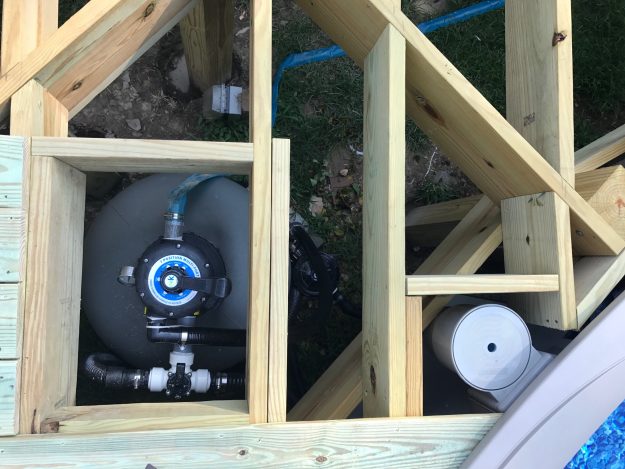 We also had to figure out how to frame around the pump. We built removable pieces to get to the mechanics of the pump, and there’s a gate in the side of the pickets around the pool so we have access to it.

I think that’s about all the tips I have. But if you have more questions, we’d be glad to answer them in the comments below 🙂