After sharing my new adventure yesterday, I thought I’d share a little story about my mantel. 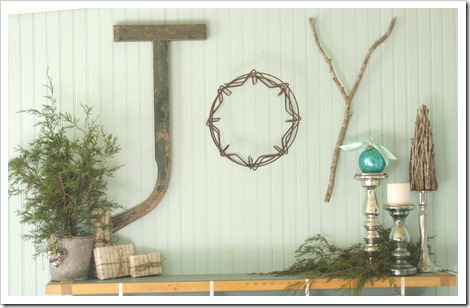 I didn’t even realize that my JOY came from 3 generations of Mr. SCC’s family until I was talking to Cha Cha yesterday. She’s a sucker for all things sentimental, so we just started talking about the 3 letters and where they came from.

Since I “discovered” the letters in reverse, I’ll share them that way 🙂 Mr. SCC found the “Y.” We needed a ton of little sticks for a twig topiary (I’ll share that later this week), and while we were out walking (before his lovely vacation in le hospitale), he found this big branch with tons of little twigs. I clipped them all off and realized that it made the perfect letter Y.

The “O” is actually a wire spool that was used to hold welding wire, from Mr. SCC’s dad. He sent it to my house years ago with an old extension cord on it (which died a few months later), but there was something so cool about the spool itself that I just hung it up in our barn and thought, “I’ll figure out how to use that someday.” Well, someday came this year 🙂

The “J” was originally an old plow handle from Mr.SCC’s granddaddy – one that his dad had put up in his tool shed way back in the corner. That shed is like the mecca of beautiful junk. When I need something purdy & rusty, that’s the place I head to first. I figured that he’d have a jewel hidden in there, so we dug around, and I was right. It hadn’t been a plow for years, but the handle was still in beautiful shape, and perfectly chippy. His dad took a slice off of the bottom (which is now the top), and then screwed it onto the crooked part.

And so, my friends, we have a 3 generation piece for my mantle. Kinda cool that it just happens to reflect my favorite word amongst my favorite season. Love it when life works out that way. Oh – and the fact that it was all free… well that’s just icing on the cake 🙂