Being a child of the 70s, Saturday morning cartoons were a big part of my life. And Super Friends was my very favorite. I wanted to be Super Girl, because she could fly. My mom, being the awesome supportive person that she is, even fashioned me capes out of clothes pins and bath towels. My grandmother thought I needed the ability to fly, so she took an old mattress and put it on the ground at the end of her very high porch, then sent me running from one end to the other and jump onto the mattress. (How in the world did I ever survive childhood, I have no idea. It’s one of life’s greatest mysteries.)

I could fly! Over and over again, all day long, I would run from one end to the other and get my Supergirl on. It was one of the best days of my four year old life.

A few days later, I went back to see my grandmother, and as a 4 year old child, I didn’t know to look and see if the mattress was still there. Oh no. I just decided to run full force from one end to the other, all 30 or so feet, as fast as my little legs could carry me, so I could once again find my wings. So as I’m running across the length of the porch, I hear my grandmother yell, “NOOOO!!!” just as I began to leap. Because what I didn’t know was that my uncle had removed the mattress and replaced it with a car windshield (because we were classy like that.)

So my amazing superpower had been taken away. And all I had to show for it was a big gash right between my eyes. It’s only a miracle that it was the only injury I really got, but I still have the scar to remind me of the day that I abandoned Supergirl and decided to become Wonder Woman instead. Her invisible jet and hella rad accessories were so much cooler than a cape and flying into windshields. To this day, I still love Wonder Woman, and even call my sweet husband “Batman,” because we’re cool like that.

When I bought some new chairs, I knew that I’d have to make new pillows to match, so after many, many thoughts of what to put on them, I finally landed on Batman and Wonder Woman. No matter if you want to make a pillow or a Halloween costume, making a DIY superhero logo is super simple…

First you’ll need a Silhouette machine. I’m sure you could also print out the font and use it as a guide to cut the logo out of some iron on vinyl, but the machine makes it way faster. To get the shape of the logo, I used a free font called Hall of Heroes <go there to download it. There is almost every popular super hero logo included with the font that is free for personal use.

Because I wanted one Batman and one Wonder Woman, I put one of each on just one single sheet of Gold Medal Shine iron on vinyl from my awesome sponsors at Happy Crafters. (It’s the best gold iron on vinyl I’ve ever seen – that stuff ROCKS!) PS – I made two pillows from 1/2 a sheet and have enough to do something else. 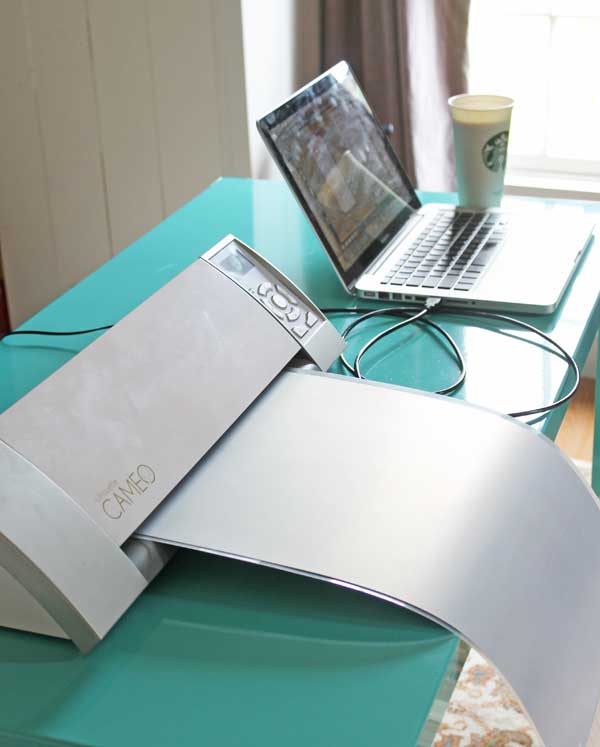 I cut out the logos with my Silhouette Machine, which took about 2 minutes.

Then I pulled away the negative vinyl space. REMINDER – if your logo has lettering, be SURE to reverse the image before cutting. Mine didn’t matter, but yours might, so be sure before you cut!

Here’s the not so fun part (but it only takes a sec.) Font logos aren’t 100% perfect, so look it over and see if there are any wonky spots where it might have had a tiny glitch. If so, use a razor to carefully cut through the vinyl (but not the backing) and clean it up a bit. Batman was good, but Wonder Woman needed a tiny bit of work.

Now sit it aside and make a pillow. I use this method to install a zipper and this is how I install pompom fringe. Put it together and you have a pillow. Or buy a plain one and add the logo on like I did for my Hello pillow. 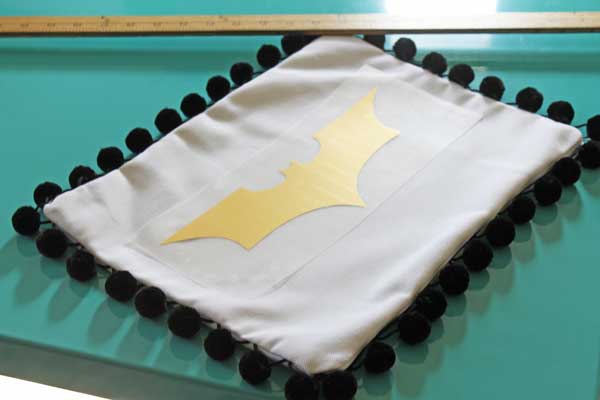 Once you have the pillow ready, center your image in and iron it on (look at that Hello Pillow again for tips on that).

After you have it ironed on, let it cool and then peel off the backing and you’re done! 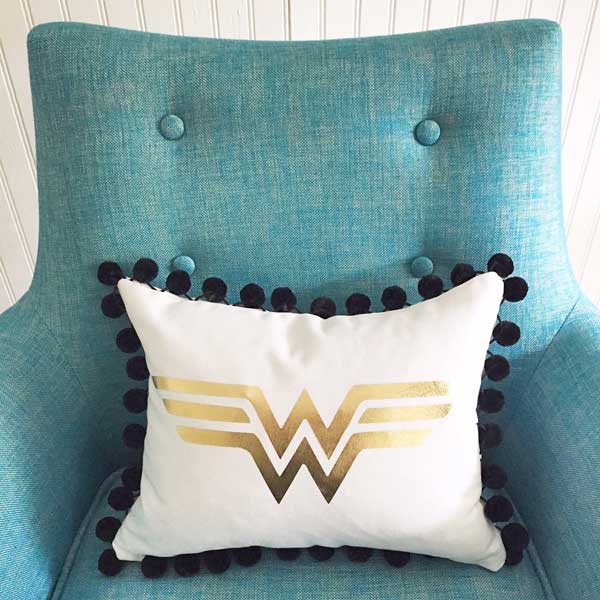 Including making the pillow, the entire project took under an hour to make two of them. And I don’t even have any scars from making them.