Let’s talk about frozen pizza. About six months ago when I shared my freezer meals, I had no idea that so many people would find it interesting, and 5 million hits later I’m still in shock. I’ve had requests daily for another batch of freezer meals, so today I’m going to share how to make your own homemade frozen pizza. It takes a few hours, but with summer coming, this is the perfect way to stock up your freezer for all those lunches that seem to dictate summer days when kiddos keep your days busy. For this batch, we’re making both the crusts and dough from scratch (plus I’ve thrown in a couple of our favorite pizza recipes, too.) And be forewarned, this is a longgggg post! I could have broken it up, but then my blog would be flooded with pizza posts…. and I’m not a pizza blogger, I’m a DIY blogger who occasionally shares stuff she cooks 🙂 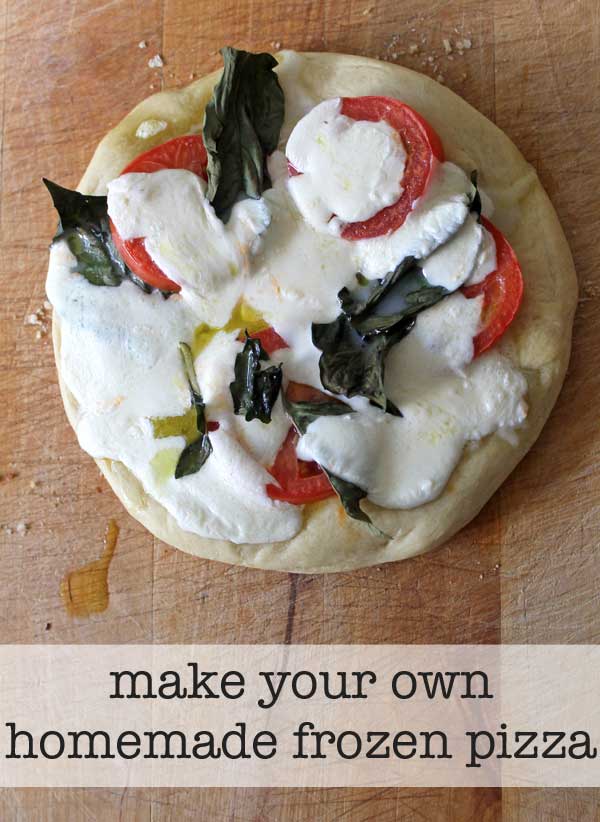 Before we get started, here’s some tips on making your own frozen pizza.

1) It’s gonna take a while. This is not a quick job, it took about six hours to make 40 eight-inch frozen pizzas.

2) Unlike my other freezer meals plan, this one is kinda low key. There are tons of little pockets of time, so it’s not nearly as stressful.

3) It’s still not a fairy tale. You’re going to have dough all over your kitchen. And at the end you’ll feel like a pizza chef. It’s all good, though – the pizza is seriously yummy.

4) Help makes it easier. Got a teenager? That’s the perfect solution. If not, you can do it yourself, it still takes about the same amount of time. It just makes it go by faster because you have good company to chat with.

5) You’ll need a stand mixer. If you don’t have one, borrow one. Or maybe this will finally be the reason you’ll break down and buy it – haha!

7) You don’t need a commercial kitchen. Besides the mixer, you’ll need a couple of sheet pans, a good heavy bottom pot (I used my dutch oven), a cutting board & knife, and baking basics (measuring stuff). I have a tiny kitchen, so I had to use my table to help with the dough proofing. You might consider setting up a folding table if you need more space.

8) You’ll need quite a bit of freezer space. Frozen pizzas are now hogging 1/2 the real estate inside my side by side freezer. Don’t worry, I left room for ice cream.

9) Wear comfy shoes. You’re going to be on your feet a lot. I learned this the hard way from my first rodeo. 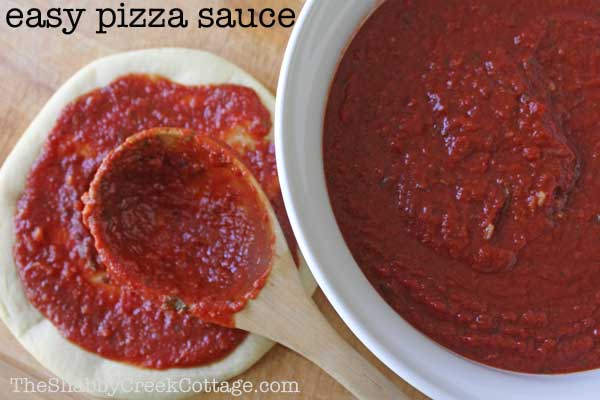 First, we’re gonna make the pizza sauce. In a large, heavy bottomed pan, put in all of the following ingredients:

Combine all ingredients, mix well, bring to a boil on medium high heat, then drop down on simmer and cook for 3 hours with the lid on the pot. Stir occasionally, but pretty much you can leave it alone and let it do it’s thing while we work on the pizza dough. 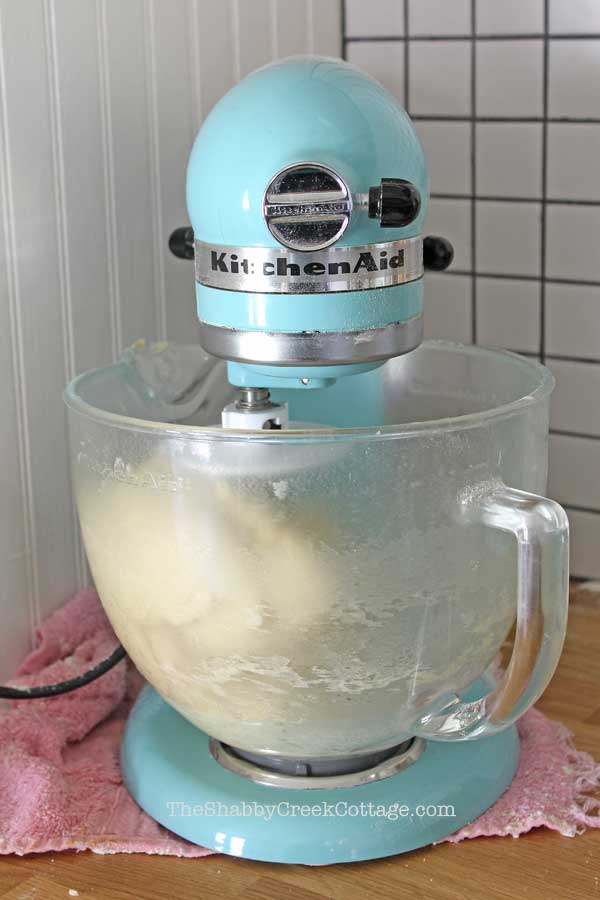 Now for the dough… Start by putting 2 cups of very warm water (about 120 degrees F) in the bowl of a stand mixer. Add in 2 TBS of sugar and 2 packages of yeast and mix together. Let it set for 2-3 minutes until yeast is frothy. Once the yeast is ready, add in:

Just dump all those in the bowl on top of the yeast mixture, then using a dough hook, mix on low until all the ingredients come together. Once you have a dough ball, mix on medium high speed for 10 minutes. 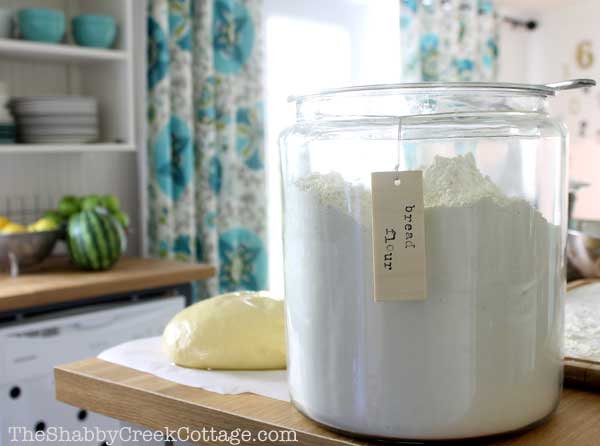 *Bonus tip: my slightly unlevel counters made the mixer try to walk off (ummm, it actually fell in the floor at one point.) I put a wet towel underneath to help give it grip and keep it from going everywhere.

*Bonus tip 2: If you have more than one bowl, it will come in handy. 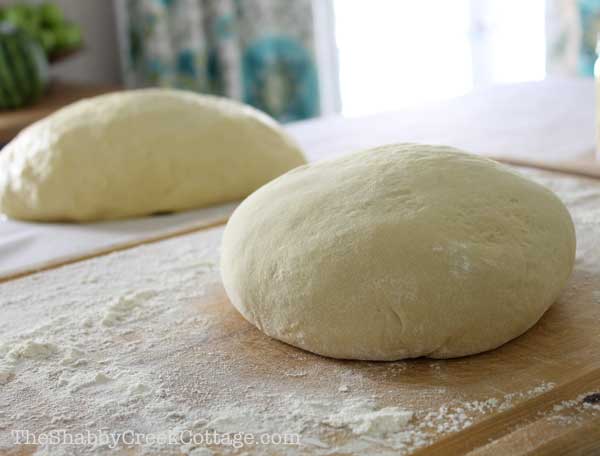 Once the dough has mixed 10 minutes, then bring it into a ball on a floured surface. 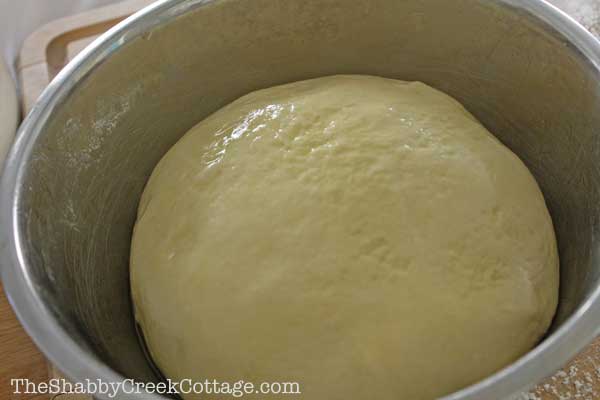 Put some olive oil in a small bowl and turn the dough ball around in it to coat well, then place on some parchment paper on the counter. After the first one is done, start batch two. when two is done, start on three. By the end of batch four, you’ll be ready to start the second step of the dough. 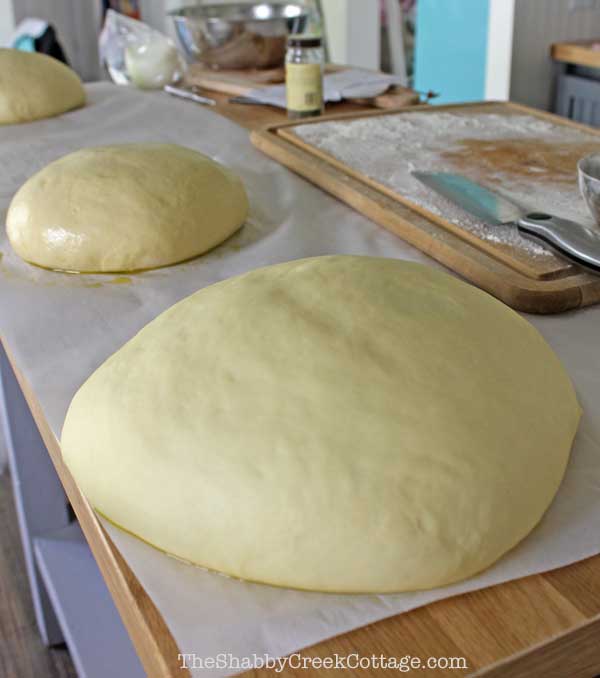 After it’s risen for an hour and doubled in size, you’ll need to punch it and divide it for each individual pizza. 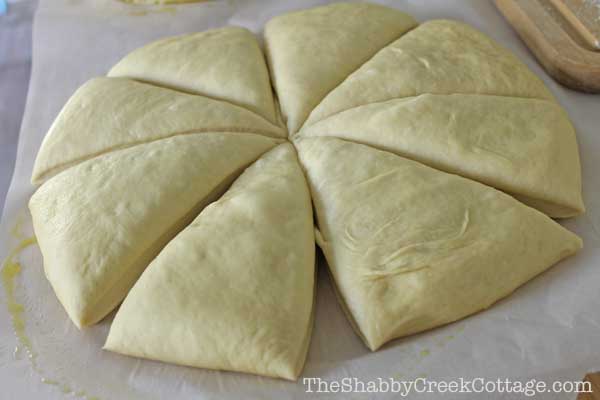 Instead of one heavy center punch like most dough recipes, flatten it out like a big circle, then cut it up. This recipe makes eight 8-inch pizza per batch (so 40 total). 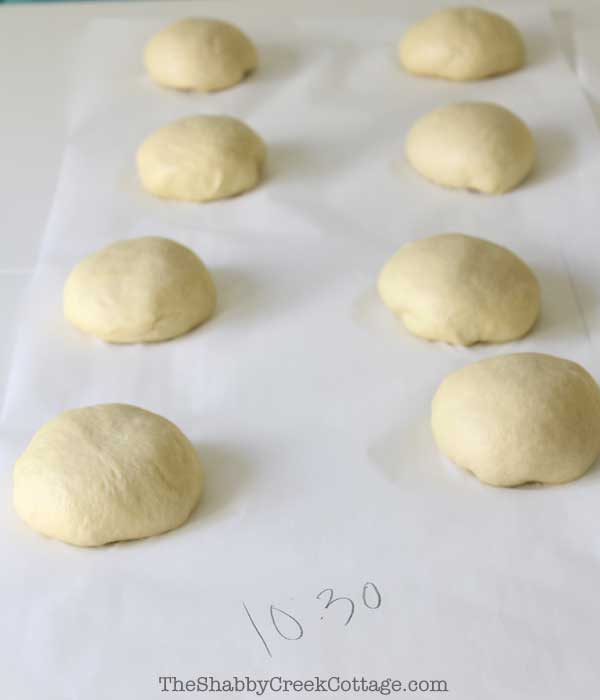 Reform the cut pieces into a small ball, recoat with oil, then put on a fresh piece of parchment. I found that marking the time it would be ready helped, because you’ll lose track of time after a while. It will need to rise another hour. Keep working on making dough, or punching/reballing dough, until you get it all made. You’ll start baking long before the last batch is cut into smaller pieces, but you’ll find a rhythm. Once the dough is all made you’ll know you’ve made it half way! 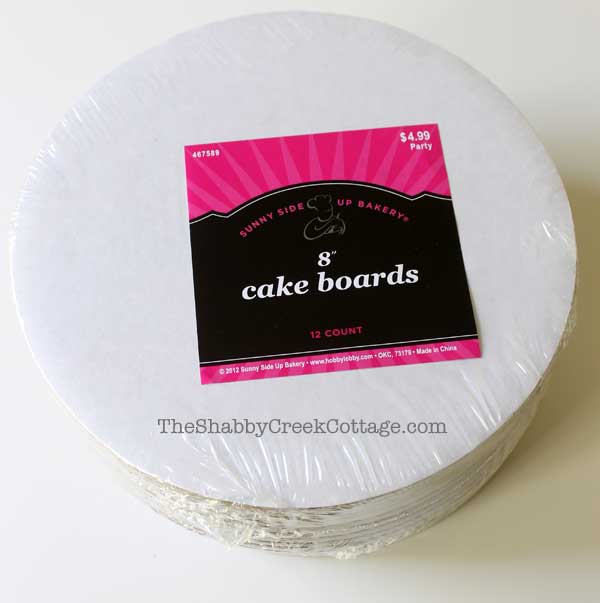 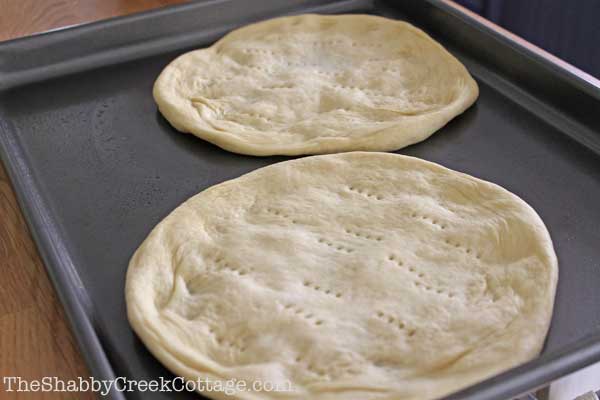 When the small balls are ready, stretch them out to eight inch rounds, and bake them (2 on a sheet pan worked for me) for 7 minutes at 350 degrees. This keeps them from being too soggy after being frozen. 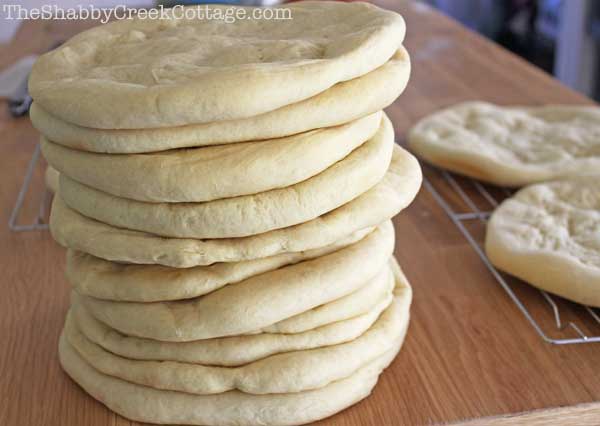 Only cooking 2 at a time seems like it will take forevah, but it’s not really that bad. You’ll have tons of little pockets of five minutes of time to punch more dough, or chop/prep veggies for the final pizzas, or even wash a few dishes. It only takes a minute or so to get the fresh ones off the pan and stretch out two more for the next round. I found that getting them ready to go in the second the other ones came out was really easy, especially using two pans. 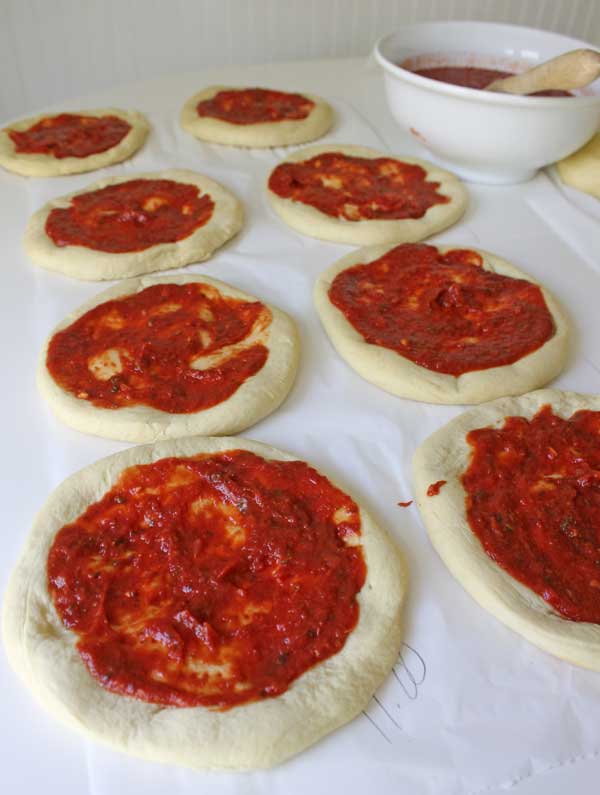 Once the crusts have completely cooled, you’ll want to spread them with sauce and make sure that’s completely cool as well before you put on the toppings. You do NOT want to put hot stuff into a freezer. 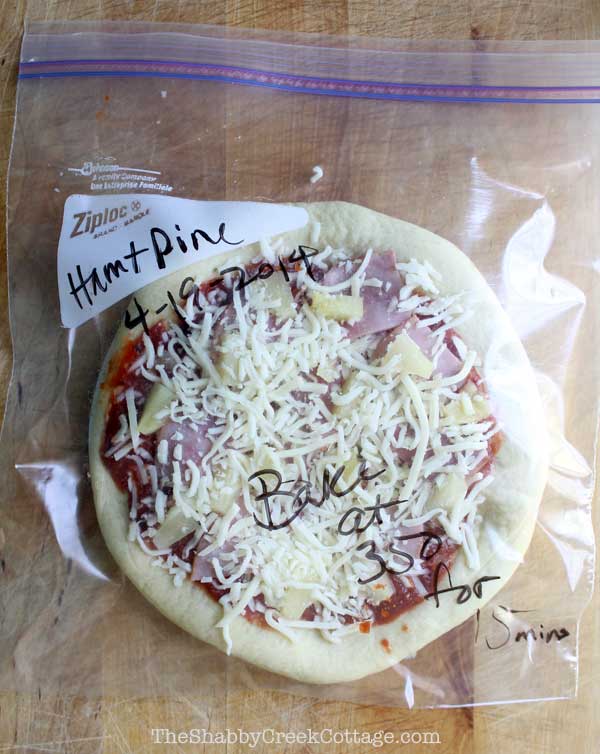 Once topped, slide onto a cardboard round, then put into a freezer bag. Mark what is on the pizza, along with the cook time (we bake all ours in a preheated oven at 350 degrees for 15-18 mins), and also put the date on there so you’ll know when it was made. (I may or may not have thrown away a lasagna that was six months old…. which I knew from the date…) 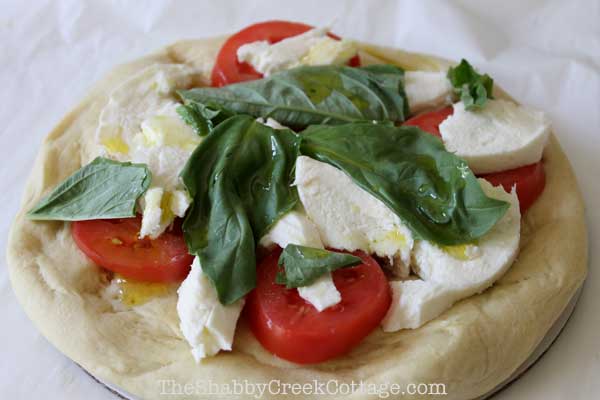 Besides the basics like cheese, ham, pepperoni, etc, I also got a little fancy and made a couple of kinds of other pizzas. Like this Pizza Margherita. Fresh slices of roma tomatoes, fresh sliced mozzarella, fresh basil leaves and a drizzle of olive oil before going into the freezer… 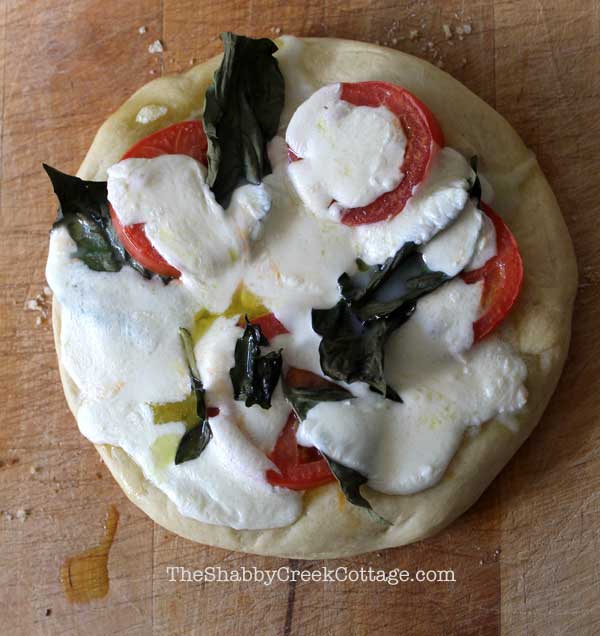 And it was absolutely divine! 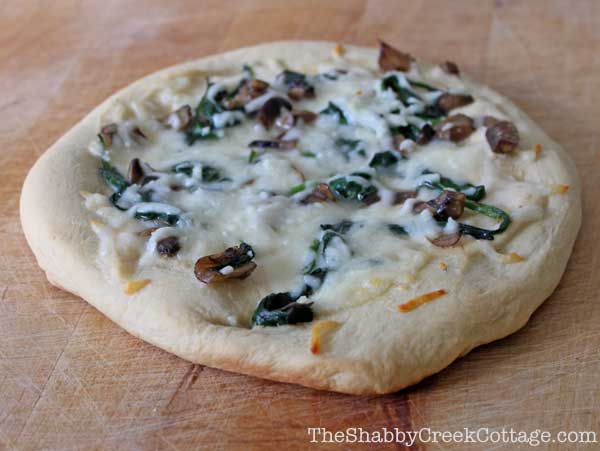 And my favorite: Spinach mushroom pizza! To make this one you’ll need:

Sautee the mushrooms in the olive oil, then once completely cooked add in the fresh spinach. Once the spinach is wilted, season with pinch of salt. Let cool before assembling pizzas. On the crust, use two tablespoons of Alfredo sauce (mine was from a jar) and sprinkle on the mushroom/spinach mix. Top with 1/4 cup of grated mozzarella cheese and freeze. Because each house hold likes different pizzas, I can’t really give you a list of what to buy like last time. But I can tell you what I used:

And, last but certainly not least – if you’ve done the math (and made it this far) you know that we had 36 cardboard rounds, and 40 pizzas – so we had one each for dinner…. and they were delicious!!!