This post could have alternately been titled “How I became the world’s meanest mom.” Seriously. Because the struggle with teenage entitlement is real.

Let’s start at the beginning. My teenage daughter wasn’t always a selfish, spoiled, entitled brat. Yes, I just called her that. I know most of it was my making – and no matter how many conversations I had with her about her behavior it never really helped. She’s a super smart kid, one who was in the gifted program in elementary school and even honors classes all the way up until high school. Then the drama of high school proved to be very difficult (not the classes), so we switched to home schooling. When I say we “home school” it’s a very different path than most parents, because we started in 11th grade and all of her education is dual enrollment through our local college. So when her friends graduate high school, she’ll have her AS and be half way to her bachelor’s degree by the age of 17. I’m not telling you this to brag, but so you’ll understand that she truly is a hard working girl – but she fell into the entitlement trap fairly quickly. And she went downhill so far within a two year span that her actions towards her father and me were becoming emotionally abusive. The “Don’t touch me!” and “I HATE YOU!” kind of abusive. Her excuse was always the same… “I’m in honors classes, I make straight As, I don’t break curfew – I’m a good kid!” She could have given Regina George a run for her money. Her whole entitlement attitude had become so cavalier that I knew it was going become a major issue for her as an adult. 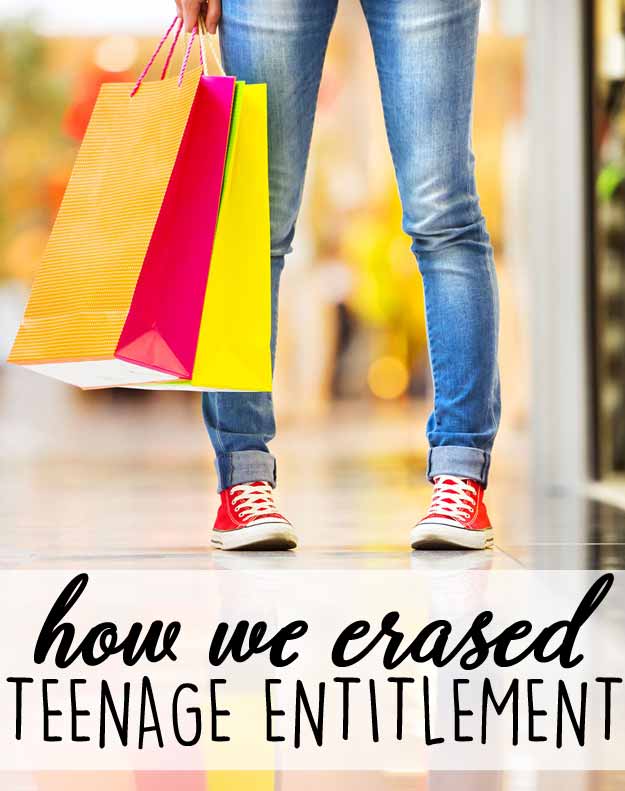 But I really didn’t see it coming. That was until one day when her closet full of clothes, that most teens could only dream of, wasn’t good enough. See entitlement. We went to countless concerts and events (often with backstage passes), and it wasn’t a “big deal” or a treat – she had come to think it was normal instead of a luxury. Even more entitlement. There were tons of other issues, from being disrespectful to dismissing our requests for her to do her chores… the list is too much to explain – but trust me when I tell you that there came a point where whatever we bought for her, did for her and no matter how we tried to make her see that her life was pretty awesome – it was never enough.

One day, after listening to her yell at me about something completely petty, I broke. At first I cried, like a lot. Then I realized it wasn’t from my lack of trying, it was from her entitlement attitude and lack of gratitude. If you’re sitting there nodding your head about any of this – you know the feeling all too well. You want your child to be happy. You really, really do. You invest time, energy and money into activities they’re interested in, into helping them find the things in life that make them happy. But here’s the thing… it never worked.

But in the end we realized this did nothing but created an even stronger sense of entitlement in her mind. She could have whatever she wanted and she could have it now. I’d love to say that the solution to our problem was easy. I wish I could tell you one simple trick to solve all your issues and make your child revert back to the loving person you know is deep inside.  So we did one of the most drastic things parents could ever do – we stripped away her life as she knew it.  It was the hardest thing I’ve ever had to do in my life. So here’s how it went down…

This is how we erased teenage entitlement in our daughter.

We took away every single thing she owned. Every. Tiny. Thing.

What we left her with:

Seems drastic, huh? It was. But you know what… it worked.

The first two weeks were ROUGH. They were so hard that I really wanted to throw the towel in about 12309875 times. She was even more rude and even more hateful because she had literally just lost everything. We knew it was hard on her. And, one night, as I watched her throw a tantrum so fierce that would make a two year old blush, I sat with her and told her I knew it was hard, while I tried to be understanding. But I still didnt budge. It was similar to seeing someone detox from drugs – and I’ve literally watched that happen. It was eerily similar. I felt terrible for her, but I knew that it was the best thing we could do for her. After about 10 days, her whole demeanor started to shift.

Before you decide that we were being terrible and shouldn’t be parents, I’ve talked at length with my own therapist about this who has been shocked at the positive transformation of our girl. And she approves, so let’s continue.

In those first two weeks basically the only activities she could do was what was in the common areas of the house. She had no access to her own things, so she couldn’t sit and read books she liked. So she cleaned. She cleaned a LOT. Our house has never been so spotless. She cleaned so that she didn’t have to interact with me at all, she kept herself busy with tiny chores that you’d never think to do. After about a week, when there was nothing left to do, she started working puzzles. Then she did some walking/exercise. You know… normal things. After her major tantrum, a change came over her. She started to find a calm.

Two weeks after her attitude changed (about three weeks after she lost everything), she gained back night time access to her room. She could sleep in her bed and get dressed in her room (clothing only – no makeup, etc.) She couldn’t go into her room until 9 p.m. and had to be up and out by 7 a.m. She seemed much more appreciative of that amazing closet that she was so dissatisfied with only two short weeks before.

Two more weeks went by and she gained back the privilege of using our house phone (a land line.) She could now call her friends and her boyfriend. It was the first non-family contact she’d had in a month, and instead of whining that it wasn’t her cell phone, she was grateful to call her best friend. Yes, I was shocked she called her first and not her boyfriend. And she barely used the phone – maybe one call every other day (her own choice, not ours.)

Two more weeks went by and she was able to actually have friends visit. No over nights, but she could have company. And, contrary to what I expected, she didn’t overuse the privilege. Even though we didn’t set super strong boundaries, she only had friends over about once a week for a couple of hours at a time.

Two more weeks went by and she got back her makeup and hair supplies. This got the biggest reaction of happiness out of every other privilege she regained. I think she might have cried happy tears. Then she didn’t even use it for three days. Funny how that one worked.

Two more weeks and she got back the keys to her car. Before her lockdown, she wanted to go somewhere every. single. day. She went to the store for frozen pizza then came home and piled up to watch a movie.

Two more weeks and she got the last thing we took away – her iPhone. When she turned it on she literally had 200+ missed texts. She deleted them all without reading then texted her friends.

Now here’s the happy ending: We have a COMPLETELY different child. This girl, who wouldn’t even let me hug her before, has become a loving, grateful person who actually wants to spend lots of time with us. Like just chill on the couch or work a puzzle together kind of time. Every once in a great while, she’ll ask to go shopping and I will gently remind her that she doesn’t need anything. And if it’s just something she wants then I can gladly find her some work to earn the money.

Our girl is happy, healthy, and most of all, grateful. She’s happy with what she has and rarely even mentions anything she “wants.” She might hang out with friends once a week (although taking 19 hours of credit hours this semester has her pretty busy.) She doesn’t spend hours with her phone glued to her hand. She’s the kid I wish I had all along – but it was my own fault as much as hers. So I had to suffer through her punishment, too. Now hopefully we can all live happily ever after.

And I would do it all again… my only regret is that I didn’t address the entitlement sooner.