Right behind making wreaths, lighting is one of my major nemesises (nemesii?). I try really hard, but often times fall short of finding great lighting at a great price. Sure, I’ve scored a few great deals here and there, but when you’re in the thick of a room makeover, nothing seems to fall into place. Most of my upcoming bedroom makeover was made, built, or otherwise transformed by me & Mr. SCC. I tried hard to find a light fixture I loved, but DUDE! it was not happening. After browsing some of my favorite catalogs, I kept being drawn to modern lighting. Really expensive modern lighting. Sigh. After bugging my sweet husband over and over again, he kept telling me that we didn’t have the right tools, or the supplies could be more than the light I was looking at. Pfffttt…

Which is why I was determined to figure out how to get a light for less than $20. Y’all know I’m a cheapskate. But, in the end, I won, because I figured out how to get the modern style light I was craving for a fraction of the price. Yes, this is the tale of how to turn a lantern into a light fixture. 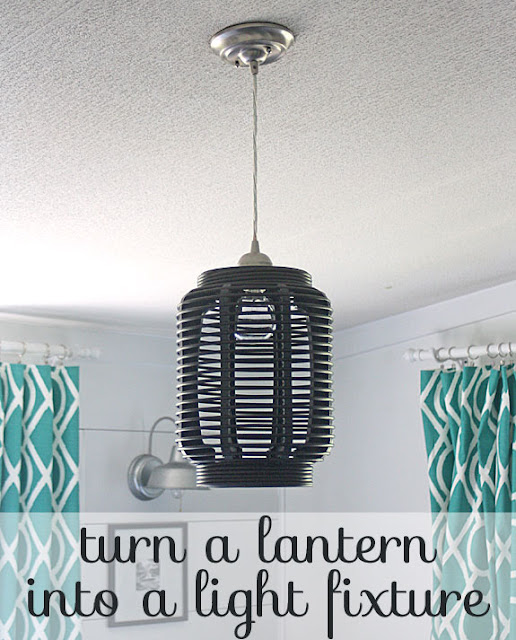 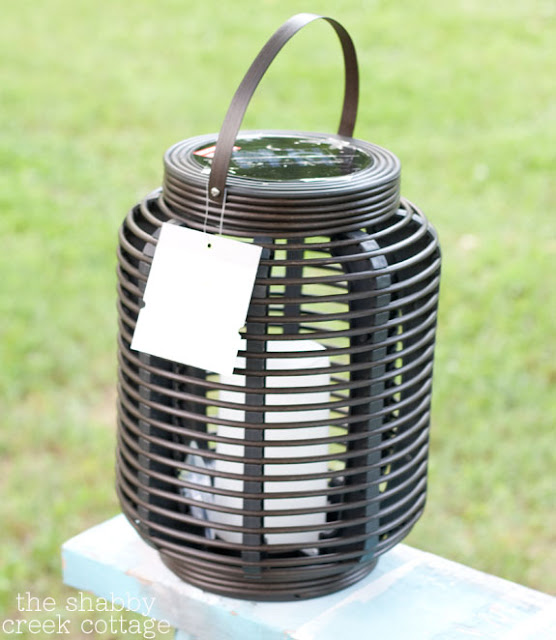 You know that rush you get when you walk into Target? Ahhhh… me, too. It’s one of my happy places. Even if I’m broke, just browsing the aisles of pretty stuff helps charge my inner creativity.

So I walk into Target, already knowing that the light fixture I have is great, but it needs something. Because the Mr. didn’t really appreciate the industrial vibe of a naked bulb on a dangling fixture that clearly was meant to have a shade, but didn’t. I got it. I was totally in love with it. Him? Not so much.

Back to Target: I was roaming around the store, keeping my $20 budget in mind, browsing every clearance end cap I could find, hoping for a basket or a wicker trash can, or… well… something. Something that I could figure out how to make into a shade for the naked bulb.

After walking all over the store, I decided to look in the back corner, which is where the seasonal items are typically found in my store. I found a huge, amazing basket, intended for towels, etc. by the pool (I think), but it was $49. For a basket. Have mercy.

Because I’m persistent, I kept looking. And then the heavens parted and I noticed out of the corner of my eye a clearance sign, right there in the seasonal decor. Underneath was a lantern, one that made me want to run as fast as I could, yet I walked calmly because I just knew that even on clearance it would most likely be out of my price range. I was wrong.

$14.97 on clearance. SCORE! I looked it over carefully. It is/was a solar lantern, but upon close inspection I knew that it could be stripped of all the lanterny bits and made into a light. I was on a mission. 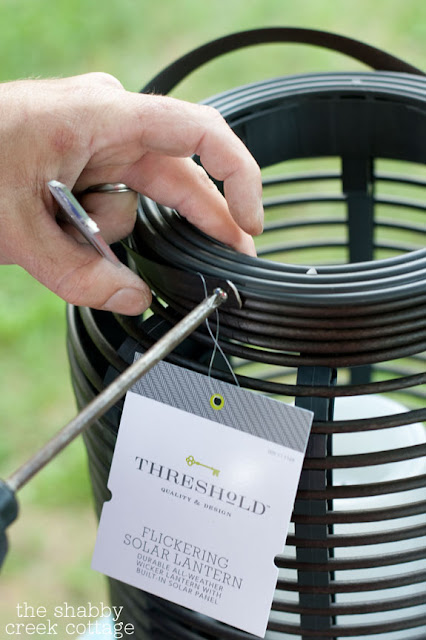 So we got home, and I told Mr. SCC I wanted to take it all apart. Yes, dear, a brand new lantern. I’m not going to wreck it — it’ll be gawgeous. Because he loves me, he took off the handle. 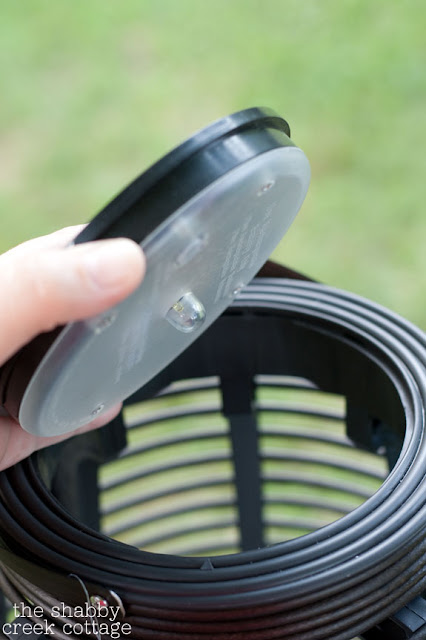 It’s a good thing he believes in my vision, because he had no more than put the screwdriver down before I had popped the top off and had him looking for the pliers. 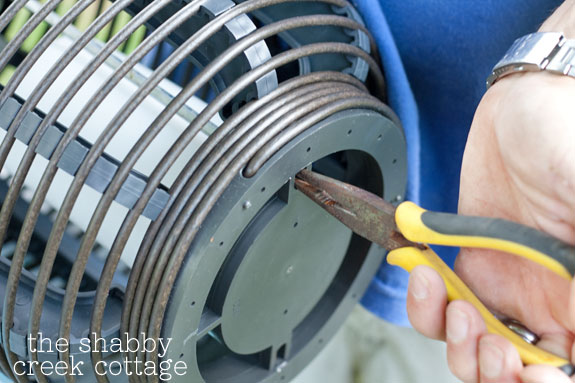 Apparently Target didn’t want that candle-ish part to come out, because they couldn’t just use some regular screws. Oh no. They had to up the ante and use little bolts, complete with ridiculously tiny nuts that may or may not have been cursed during the removal process. 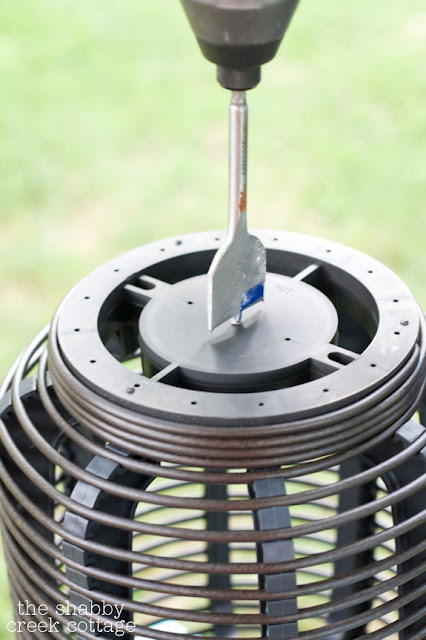 But, remembering that I’m a persistent girl, we took out the way too tiny bolts and flipped it upside down. Now we had a naked lantern to go with our naked bulb. Before we could join them in lighting matrimony, there was one more step, creating a hole for the socket. That was probably the easiest part of the whole process, because it took about 60 seconds to use a spade bit and make a path for the light. 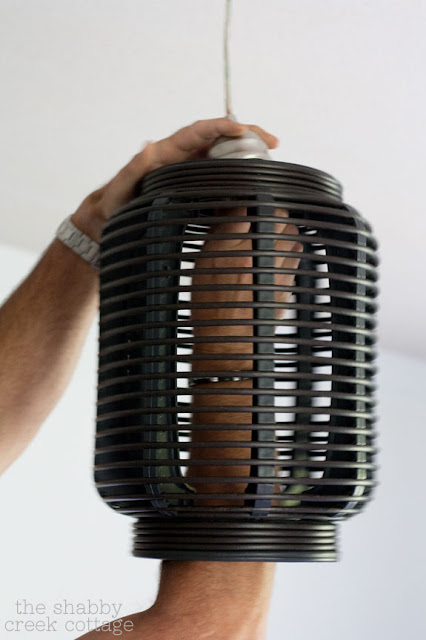 On days when I wonder if my husband loves me, I reminiscence over things like this. Only a man who is truly in love will enable crazy decorating decisions. 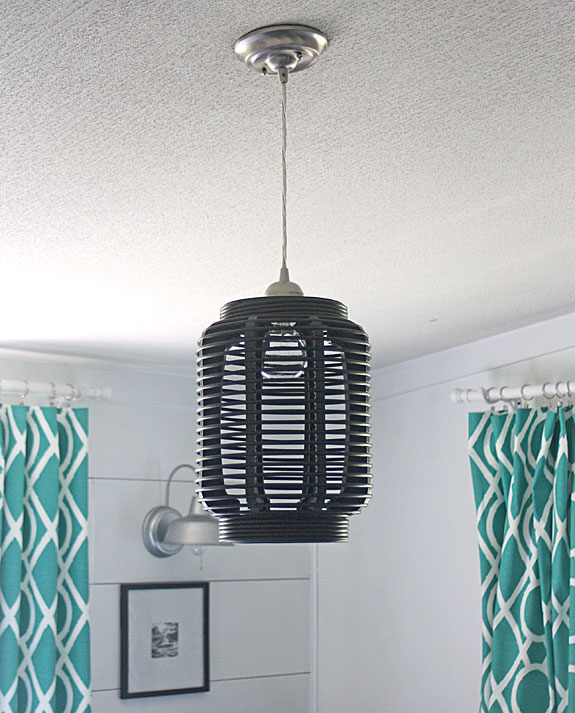 In the end, I’d love to say he stood back in awe and declared the light “Gawgeous!” However, he did not. I did get a “Looks good,” as he jetted outside before I could find him another project. Which in his language is a two thumbs up. Works for me!

Oh! And look, there’s another sneak peek into my bedroom. It’s almost done… I’m such a tease! Don’t worry, though. We’ll talk more about it soon, and I’ve got tons of DIY projects to share from it, too!